Originally commissioned by dOCUMENTA (13),  Transition 2012  is a large public sculpture now permanently installed alongside the N34 highway in Drenthe, the Netherlands. The work borrows its title from a cinema term, indicating a technique of film editing by which scenes or shots are connected. In general, transitions are used to express tone or mood, suggest the passage of time, juxtapose two or more scenes, or separate parts of the narrative. Passing through this tunnel sculpture also proposes a theatrical act, where one either leaves from, or appears on, stage. Transition 2012 evokes a sense of suspense and possibly a promise, like the moment when we close our eyes to make a wish, hoping for, and at times even expecting, things to change, or our imaginings to become real and that—against all odds—reality has been magically altered. Raimundas once mentioned that, when entering the work, you expect there will be a twist, but when you exit, you understand the twist is in you. Carolyn, refers to the sculpture as “that work that spits out people.” 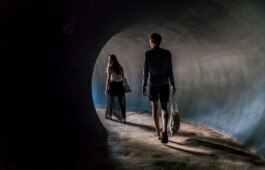 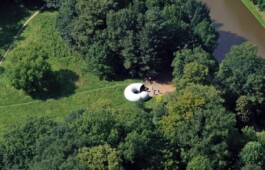 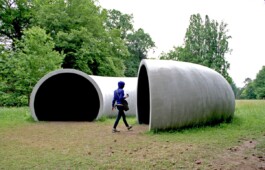 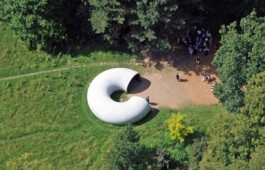 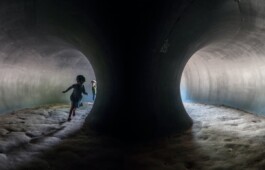