“Trust me – I’m an artist,” Gabriel Lester says sometimes. Should we trust that he is an artist? Should we trust whatever he says because he’s an artist? What if he says “I am Kanye West”? What if he says this artist run exhibition is about creating a composition of autonomous universes with a centre that is not the artist himself? Should we not look surprised when he says each separate element is a group show in and of itself? Should we have confidence in his friends’ intentions to play along the lines of a crew in production and narrative making? Should we believe that the excessive figure of the artist is necessary for collective celebration and joy? “See you in the future,” Gabriel Lester cheerfully calls, as if everything that comes to us is coming to meet us.

Changing twists and turns begot this exhibition, apparently, because what was right Monday was all wrong on Thursday. Foreshadows, composite characters speak of doppelgängers with mistaken identities – like a stick insect that’s not a real stick, but so convincing that even a real stick thinks it is. Likewise, gestures and body language reveal the concealed intentions with which strangers recognize each other at the agreed meeting place. Yes, you still find each other. Just as we agreed in adolescence to meet again at the tower on a date a century onwards. We did it like we hid small trophies in the earth, with the future finder’s phantom enjoyment in mind. In the many cities with seven hills, like Rome, Brussels, Jerusalem, Mecca, Vilnius, Moscow and Prague, a secret is probably hidden under every hill. But these are the speculations and loose ends spoken of in a cafe called Onions on an island of disappearance and appearance, where the Bacardi rum headquarters, a remarkable building, is questionably copied from a copied original.

The Unresolved Extravaganza is a truly artistic extravaganza, a phenomenon that is characterized by an autonomous style and structure, and a broad range of theatrical elements. In the exhibition, a selection of art works of Gabriel Lester from the last two decades has been brought together. All these works have come into being through dialogue, through artistic collaboration, or arising from a collective working method. Furthermore, a number of earlier works from Lester’s body of work is given renewed attention, special treatment, interpretation, mixing and remixing.

A large part of the works in the exhibition express the power of art as the means to expand the mind, and represent various ways to understand the world using associations and abstractions, and by means of free association, jamming and improvisation. The works invite the observer to remember and/or imagine his or her own dynamic, own truths and own stories. The French Horn, the installation that is more or less hidden behind Murmur, shows a world behind the scenes, a world of connections and relations. This work is, as it were, the beating heart, the madness of, as well as the reason for, the exhibition. Arising out of a collective of nine artists, scholars, copy writers, students, architects, two Amsterdam homes for the elderly and a group of amateur actors, this installation is an outstanding example of the type of work whereby the role of the author becomes completely blurred and the various relations and connections become interwoven in and through each other, as in a labyrinth of interconnectedness.

The French Horn is the harbinger of Bermuda, the installation on the first floor, consisting of a collection of sculptures, spoken texts, sound and light. Both go more deeply into the manner in which we observe and orientate and associate the world around us, on the one hand by means of mapping and on the other hand through memory and suggestion. Such art works introduce a definite tension span, but are rarely reducible to one explicit message or a single idea. In place of this, they show possible ways to view the world, how it is represented, and which mechanisms and parts play a role in our perception and our understanding of this it.

Finally, there are a number of works to be seen that have been realized by the John Fare Estate or in a dialogue with artists, friends and colleagues, whom Lester has had the pleasure to work with over the past twenty years. From the two years’ collaboration with Carlos Amorales in the nineties, via the permanent dialogue and adventures that Lester has had the last fifteen years with Raimundus Malašauskas, to the many voyages that he took with Helmuth Batista and the friendship with Lisa Rosenblatt, who is older than Gabriel Lester’s moustache. 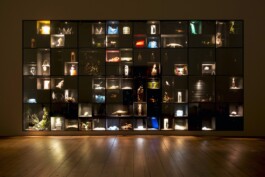 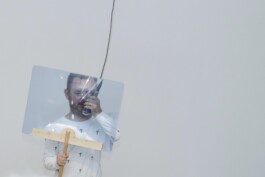 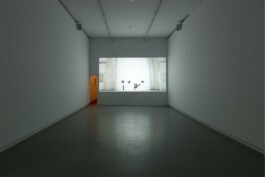 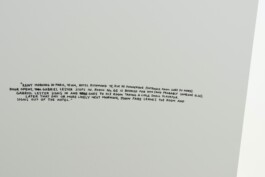 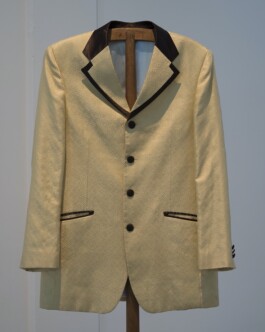 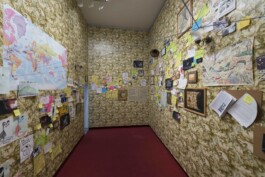 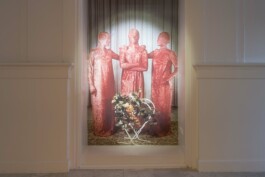 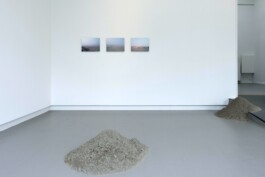 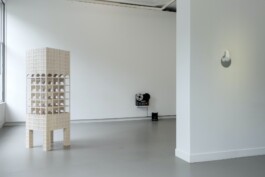