Various versions exist of Murmur, whereby a number of musicians play a piece of music from within a wall. They function, as it were, as wall of the institute. The idea for Murmur arises out of ubiquitous and virtually continually self-representation within our current digital existence. The film shows the current popular cult of personality and constant administration/management of our public profile, in contrast to the invisible life of hidden and captivated/captured/imprisoned characters.

In 2015, Lester was asked to do Murmur during the Biannual in Moscow. Against the backdrop of this sensitive and often problematic social, political, sexual and cultural climate, it seemed important to make a film about the absurdity of a culture that plucks the fruit of the arts, but refuses to water their roots.

The work took form in collaboration with actors of the Teatr Doc in Moscow, one of the few theatres that still dares to criticise and mock the regime as, for instance, in the theatre play Berlus Putin (Berlusconi’s brain in Putin’s body). In the same absurd and confrontational manner, Lester made a film that takes a deeper look into actual issues surrounding art, culture, and politics. 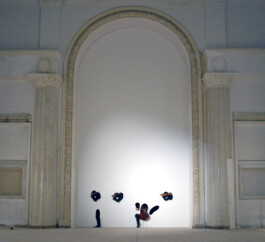