Bermuda specially developed for this show, with the intention to further develop on the coming years, forms the decor of an immersive story about coming and going, about the transformations and encounters of shipwrecked people after they have washed ashore on an island. The spectator stand in front of a wall of illuminated panels that point to, and illustrate, an ambiguous non-linear story about this mysterious place, where people and planes, objects and ships disappear.

While the soundtrack of the story plays, the boxes light up, after which they once again dissolve in the reflection of the spectator that appears and disappears and thus forms one of the personages within the fragmentary narrative. Where the storylines lead to seems unknown, but for the time being Bermuda offers an escape, a castle of mist and sand.

Robertas Narkus and Freek Wambacq made the sculptures for this work and Lisa Rosenblatt wrote the text. The narrators voice was done by Emily Coomber. The other voices by Lisa Rosenblatt and Gabriel Lester and some small parts by voice actors working for Fiverr. The props, sound and light installation was done by Lester. 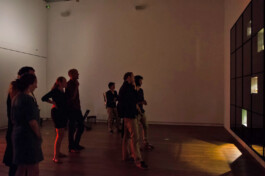 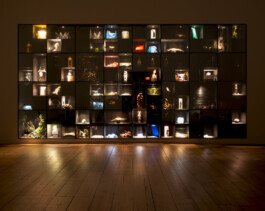 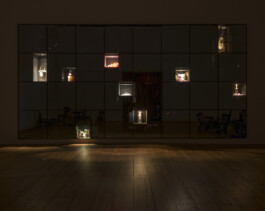